The thing about Orwell’s essays is you never know what you’re going to get. The title doesn’t always tell you.

Orwell’s most beautiful, possibly most moving passage, about the meaning of life, is tucked away in his essay “Reflections on Gandhi.” It is to my mind the best thing he ever wrote, but you won’t get to it if you say to yourself, as I did for years, Hmm, I’m pretty familiar with Gandhi; this can wait.

But here is what you would miss. Orwell is taking up the theme of ascetisism, the idea that we improve ourselve by mortifying our appetites and walling ourselves off from “worldly” attachments:

This attitude is perhaps a noble one, but, in the sense which — I think — most people would give to the word, it is inhuman. The essence of being human is that one does not seek perfection, that one is sometimes willing to commit sins for the sake of loyalty, that one does not push asceticism to the point where it makes friendly intercourse impossible, and that one is prepared in the end to be defeated and broken up by life, which is the inevitable price of fastening one’s love upon other human individuals. No doubt alcohol, tobacco, and so forth, are things that a saint must avoid, but sainthood is also a thing that human beings must avoid.

I feel about this passage as Orwell’s admirers often feel, that he is speaking directly for me. My own life took a powerful turn for the happier when I dropped the adolescent pursuit of perfection (at which I was doing poorly anyway). 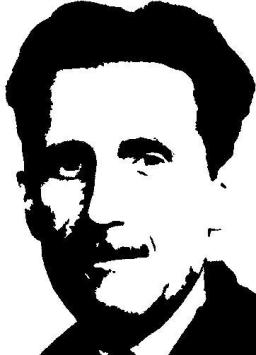 But back to Orwell’s titles, I still hadn’t learned my lesson, even after “Reflections on Gandhi.” Going by titles alone, it took me another long period to get to “Lear, Tolstoy and the Fool.” In it, Orwell critiques an obscure pamphlet by Tolstoy in which the old master disparages Shakespeare as a fraud. That’s right, a fraud. Tosltoy thinks Shakespeare’s greatness is a cult kept up by an elite conspiracy.

Well, Orwell is nothing if not fairminded. While he believes any right-thinking English ciritic must come to the defense of Shakespeare’s (true) greatness, Orwell homes in on the curious hypothesis that there must be something of deep interest at work in Tolstoy’s mind to set him against the most celebrated English author of all time.

The hunt takes some twists and turns, but at last it finds gold. The reason Tolstoy—who had a thing for ascetisim throughout his life and more or less went over the edge for it at the end—cannot stomach Shakespeare is because of Shakespere’s unremitting worldliness. The man refuses all temptations of the transcendental, although some critics occasionally impute spiritual themes to him. Shakespere’s all-consuming joy consists in making up phrases about things happening “on the surface of the earth,” as Orwell puts it. Shakespeare simply won’t be drawn into a serious religious discussion, and Tolstoy cannot forgive him for this. Here’s the basic tension between Tolstoy’s mindset and Shakespeare’s art, according to Orwell.

It is the quarrel between the religious and the humanist attitudes towards life. Here one comes back to the central theme of King Lear, which Tolstoy does not mention, although he sets forth the plot in some detail.

Lear is one of the minority of Shakespeare’s plays that are unmistakably about something. As Tolstoy justly complains, much rubbish has been written about Shakespeare as a philosopher, as a psychologist, as a ‘great moral teacher’, amd what-not. Shakespeare was not a systematic thinker, his most serious thoughts are uttered irrelevantly or indirectly, and we do not know to what extent he wrote with a ‘purpose’or even how much of the work attributed to him was actually written by him. In the sonnets he never even refers to the plays as part of his achievement, though he does make what seems to be a half-ashamed allusion to his career as an actor. It is perfectly possible that he looked on at least half of his plays as mere pot-boilers and hardly bothered about purpose or probability so long as he could patch up something, usually from stolen material, which would more or less hang together on the stage.

You might get the impression from this passage that Orwell doesn’t care much for Shakespeare either, but he does. Not only does Orwell think Shakespeare is a supreme master craftsman, but he also believes the Bard comes down on the right side of a hugely significant moral argument, the one he noted above between religion and secularism. Here Orwell pounds the hammer of judgment in that dispute:

Tolstoy, like Lear, acted on mistaken motives and failed to get the results he had hoped for. According to Tolstoy, the aim of every human being is happiness, and happiness can only be attained by doing the will of God. But doing the will of God means casting off all earthly pleasures and ambitions, and living only for others. Ultimately, therefore, Tolstoy renounced the world under the expectation that this would make him happier. But if there is one thing certain about his later years, it is that he was not happy. On the contrary he was driven almost to the edge of madness by the behaviour of the people about him, who persecuted him precisely because of his renunciation. Like Lear, Tolstoy was not humble and not a good judge of character. He was inclined at moments to revert to the attitudes of an aristocrat, in spite of his peasant’s blouse, and he even had two children whom he had believed in and who ultimately turned against him — though, of course, in a less sensational manner than Regan and Goneril. His exaggerated revulsion from sexuality was also distinctly similar to Lear’s.

Why, particularly, was Tolstoy so miserable? What had deluded him so?

Tolstoy was not a saint, but he tried very hard to make himself into a saint, and the standards he applied to literature were other-worldly ones. It is important to realize that the difference between a saint and an ordinary human being is a difference of kind and not of degree. That is, the one is not to be regarded as an imperfect form of the other. The saint, at any rate Tolstoy’s kind of saint, is not trying to work an improvement in earthly life: he is trying to bring it to an end and put something different in its place. One obvious expression of this is the claim that celibacy is ‘higher’ than marriage. If only, Tolstoy says in effect, we would stop breeding, fighting, struggling and enjoying, if we could get rid not only of our sins but of everything else that binds us to the surface of the earth — including love, then the whole painful process would be over and the Kingdom of Heaven would arrive.

Must we all be Tolstoys, then? Or perhaps Gandhis? Not if we want happiness in its only available form, says Orwell:

But a normal human being does not want the Kingdom of Heaven: he wants life on earth to continue. This is not solely because he is ‘weak’, ‘sinful’ and anxious for a ‘good time’. Most people get a fair amount of fun out of their lives, but on balance life is suffering, and only the very young or the very foolish imagine otherwise. Ultimately it is the Christian attitude which is self-interested and hedonistic, since the aim is always to get away from the painful struggle of earthly life and find eternal peace in some kind of Heaven or Nirvana.

Orwell’s essays, so often political, are, for me, deeply personal. When I read them I am keenly reminded of the bleakness of the mindset I left behind in my 30s and the solidity my life has staken on since then. My liberating discovery was that my idea of moral seriousness aligned precisely with Orwell’s. It cannot be put any clearer than Orwell puts it above: the solipsistic idea of a place reserved in Heaven utterly deflates life of moral seriousness.

One of the great joys of litereature is the serendipity of reading. You come upon something a new author offers you, and you notice a striking relationship with something else from literature you hold dear. I think the preciousness of these discoveries unfolds from the idea that writers explore the world in perfect freedom, and when they make similar discoveries they shine out with light that is more than doubly intensified. What are the odds?, you ask yourself.

It was precisely with that feeling that I read this arresting passage from James Baldwin’s The Fire Next Time recently:

It seems to me that on ought to rejoice in the fact of death—ought to decide, indeed to earn one’s death by confronting with passion the conundrum of life. One is responsible to life: It is the small beacon in that terrifying darkness from which we come and to which we shall return.

This appreciation of life for its fleetingness mirrors Orwell’s attitude almost precisely. (It’s not clear that Orwell found the prospect of permanent unconsciousness terrfying.)

Existentialists often get a bad press for focusing on death. Why be so morbid? But it is not morbid at all. Notice Baldwin’s emphasis on the fact of death. This choice of terms is an important one; it distinguishes the inevitability of death from from the experience of dying, which, of course, no right-thinking person could relish.

The fact of mortality, that ever-looming background knowledge, is precisely what Tolstoy tries to sweep away from the human experience. This sweeping away, though, is what denudes life of moral seriousness. It sets us blithely on a course to ignore this vale of tears and invest our few earthly years—our first century, as Jorge Luis Borges puts it—in the unending experience of Heaven. Twain, by the way, was right to dsiparage this prospect as a particularly offensive kind of lunacy–an amped-up dictator worship that lasts forever.

Orwell’s words once helped relieve me of this untenable and unattractive idea. The serendipity of finding the same attitude in Baldwin, a great liberation writer, was a deep pleasure. Great litereature weaves long tapestries that can, if you follow them, point out general directions in life. But they can also present captivating little details—sayings, mottoes that fall naturally from the lips. Today, such a small, absorbing detail is from Baldwin: one is responsible to life.