Admit it: if you are under 50, you have thought about the movie Idiocracy occasionally over the last few years and said something to the effect that it’s coming true.

Ever since Idiocracy came out in 2006, its jokes have increasingly seemed to evoke a real jeremiad. The movie seems less funny and more didactic over time. In fact, given the state of our world in 2006, it wasn’t even clear then we should have been laughing at ourselves in the way Idiocracy invited us to. Any country that could be persuaded by  a boffo brand name alone (Shock and Awe!) to cheer on a pointless, ruinous war would seem to need an improved capacity for political deliberation more than a good laugh. Maybe, as Idiocracy suggested, our cloddish sadism abroad was caused by a masochistic level of stupidity at home.

Below its farce, Idiocracy is instructive. Its main idea is that the breakdown of enlightened democracy in America has as much to do with the demos as with the kratia. We cannot simply blame the powers that be for our failure to form a more perfect union. A government by, of, and for the people can only be as good as the people themselves.

Was Mike Judge, Idiocracy‘s maker, a prophet then? Maybe we are too stupid to govern ourselves. But today I would like to rephrase the contention in Marxist terms: perhaps we are not simply foolish but rather mystified by terminology. Our apparent stupidity is actually the outcome of having certain politically useful linguistic patterns drummed into our heads.

Exhibit A. In Idiocracy Americans have stopped drinking water or even irrigating crops with it because they’ve been brainwashed to believe a sugary sports drink, Brawndo, will not just relieve their thirst but “mutilate” it.  There are two points to be made about Brawndo’s offenses on language, farcical though they are. 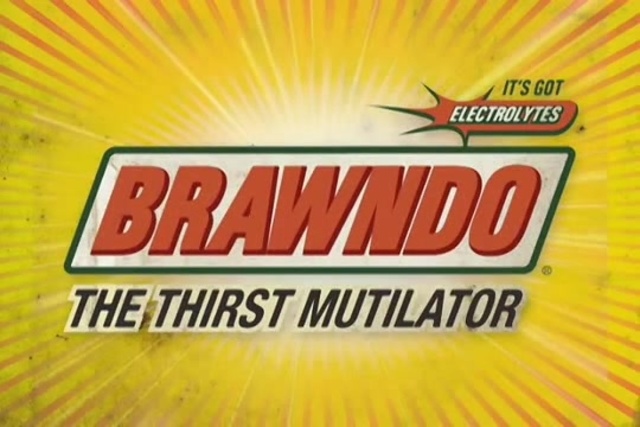 First, no one who knows even a scrap of etymology could feel at peace with the thirst mutilator’s misplaced metaphor. Thirst can be dissolved, slaked, quenched, and probably a number of other things, but destroyed by maiming?

No one likes a pedant, so let me take the fall for you: when we accept blatant distortions in our language, we should at least pause to discuss the whys and hows. Is someone benefiting from our easing of the rules? Are we re-arranging our mental furniture to accommodate the clumsy useage? (“Just Do It” may have conditioned a whole generation of us to revere naked, breakneck effort as a brave new kind of virtue.) As Orwell says in “Politics and the English Language,” when we help ourselves to stock phrases built from flawed metaphors, it shows we are not even thinking about what we are saying. And when we start allowing ad men and government officials to supply us with ready-made phrases,  we are  in the presence of what Thomas Pynchon calls the Angel of if not quite Death then at least Deep Shit.

Second, the aggressively superlative style should give us pause. At this point, if you’ve never watched a clip or two from Idiocracy to take in the monster-truck-show aesthetic of the thirst mutilator’s ads, you should. The comic macho voice of Brawndo is meant to seize you with the power to both command and fulfill your desires. Everything you need to know about a consumable, it tells you, can and must be shouted above the roar of oversized engines. And, since ads like this exist in the real world, we should ask ourselves where their appeal lies. Are we really inclined to believe lies the bigger and louder they come?

Exhibit B. The current president has an unabashed taste for the superlative. He’s going to provide the best healthcare. He knows the political system better than anyone. Everything he proposes, he will over-achieve. He’s going to eradicate Islamic terrorists, not just defeat them. On the campaign trail in 2016 he promised not just to outpoll Hilary Clinton but to imprison her.

Without a doubt Trump’s master stroke has been to designate any unfriendly news analysis as fake news. His enthusiasts can be counted on to resound the totemic phrase as reliably as Snowball’s loyal sheep in Animal Farm would auto-bleet “four legs good, two legs bad” the moment any animal hinted it might feel less than unconditional affection for the dear leader.

So what’s wrong when over-the-top becomes the new adequate? Isn’t more always better? Aren’t we Americans always reaching for the stars? Why shouldn’t we have a leader who expresses our high aspirations?

Politicians know very well that no problem set before government is ever solved completely. Competent parole boards spring future murderers; homelessness persists despite roaring economic growth; good, even great, public schools fail to educate a handful of students; some terrorists survive the campaigns to snuff them out. Politics is simply too blunt a tool to produce perfect solutions, and the world too imperfect a place to admit them; or to paraphrase G.K. Chesterton, it is impossible to organize society to abolish pain.

Superlative promises may make up the poetry of political campaigns, but no adult believes them literally after the campaign is over. Why does Trump continue to traffic in them? Actual governance–the prose of politics–is full of qualifications, clarifying conditions and other untidy details. Any leader wins some and loses some but never wins, wins, wins. Why does Trump persist, with consummate childishness, to disbelieve that reality will have its say?

Exhibit C. We are at a point where low farce meets high tragedy. Deep in Russia, in the winter of 1942, the weather and the Red Army were both having their say about Hitler’s plans to expand Germany’s Lebensraum to the east. Operation Barbarossa was not going well. Indeed, Hitler was losing, and he would soon be losing badly. How did he take the rising tide of bad news? The same way Trump and the monster-truck-show voice face the world: with outbursts of reality-defying superlatives. Faced with sure signs of defeat in Russia, Hitler doubled down, ordering his generals to “smash” and “annihilate” the Red Army’s divisions. By the end of the war he was telling them to use imaginary army groups to win. This level of utter, pervasive delusion is the logical endstate of accepting the aggressive superlative style in the first place.

The wartime memorialist and author of I Will Bear Witness Victor Klemperer called Hitler’s fondness for the superlative the “P.T. Barnum” style. It all started out innocently enough, recalls Klemperer, in the 1930s, as the young Nazi Party promised, not just to nurse Germany out of its post-World War One depression, but to reverse the very tide of European history, putting Germany back on top of the power order. Well, one thing led to another, and we all know more or less how it turned out. Hitler kept making superlative promises and kept insisting they were coming true despite the snowballing evidence to the contrary.

Let me pause for a moment for a qualification. I do not believe Trump is Hitler. I think the Don is much closer to an ordinary robber baron and, in any case, is too politically inept to become a Führer. But that said, I think it is perfectly fair to ask why he shares his P.T. Barnum style with Hitler. Why, in speech and in tweet, does he so thoroughly indulge the fantasy of slam-bang victory? I propose it is because he has happened upon a linguistic pattern that appeals so naturally to our baser selves. We all wish the world to be amenable to our wills. And once we feel we have been wronged by some group or force at large in the world, lord help us. Our idea of justice transmogrifies to conquest: we wish, not to incrementally improve our lot, but to gaze serenely over a smoking battlefield emptied of our foes.

But the problem of the aggressive superlative does not belong primarily to any particular party or leader. It belongs primarily to us, the people. We are the ones responsible for accepting or rejecting it. Marx may have been right that our leaders can bewitch us with terminology, but now that the cat is out of the bag, it is up to us to be on our guards. And now we know: once a desireable political goal (more jobs, better healthcare) has been expressed in terms of an unqualified victory, we lose our heads, it seems.

Do you disbelieve this? In his short, excellent book On Tyranny: Twenty Lessons from the Twentieth Century, the historian Timothy Snyder recounts how a paraplegic German soldier returns from the eastern front in 1945 amid the Wehrmacht‘s collapsing defenses. Despite the obviousness of the defeat descending on Germany, the soldier continues to have faith in Hitler. “Hitler has never lied to us,” he says. Everything in the real world, right down to his missing legs, should tell him he is wrong about Hitler, but he persists in his faith.

This is the horrible power of the aggressive superlative. Once we buy into it, we can find it devilishly hard to let go. So I suppose we should still be able to laugh at Brawndo’s power to “mutilate” our thirst, but in the same way Kafka and his editor Max Brod laughed as they read the final proofs of The Castle–with a comic sense of the demise of the human spirit.