Nineteen Eighty Four opens as the clocks in Oceania’s capital are striking thirteen. Winston Smith putters and cows in his shabby apartment. The pealing of the bells penetrates Smith’s skull; there is no private space there. Big Brother is everywhere.

In A Clergyman’s Daughter, which Orwell wrote 14 years before 1984, the heroine, Dorothy Hare awakes in the cold, predawn dark to the sound of  a different bell–an alarm clock ringing in the latest day in her totalitarian nightmare. But Dorothy’s hell is more personal than Winston Smith’s. Dorothy is enslaved to the whims and demands of her misanthropic father, the clergyman of the book’s title. We come to despise Rector Hare within a few short paragraphs.  He is dictatorial to Dorothy and cold, snobbish, bullying, stingy, and cruelly insensitve to the world at large. On the morning the story opens, he curtly sends off a young, desperate couple begging to have their dying infant baptized. They are poor, and they interrupted Hare’s breakfast, committing the unforgiveable class sin of uppitiness. 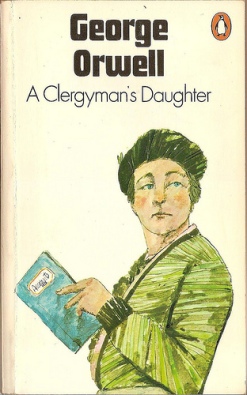 Like Big Brother, and all really good dictators, Rector Hare needs no violent force to exert control. Dorothy has done the job for him by adopting his ideology. She is a deeply compulsive Christian; she holds running, prayerful conversations with her Lord, quotes scripture to meet every quotidian “challenge,” and renders up every last question of conscience to the determination of God’s will. She works herself ragged keeping up her father’s church and looking after his parishioners body and soul. Really she is the only thing holding his miserable congregation together. Oh, she also sticks pins in her arms when she senses the slightest hint of impiety in her thoughts.

But one night, spent in the company of the village libertine, Dorothy’s pious world comes crashing down. Driven to the point of psyhological collapse by relentless service to church and father, Dorothy suffers an episode of traumatic amnesia. She finds herself penniless in London, with no sense of who she is. There proceeds a Candide-like train of indignities–homelessness, near-starvation, near-prostitution, near-death-by-exposure and wage slavery–that gradually awakens Dorothy to a sense of her former identity. She is, however, so engrossed in coping with her new, and much more desperate miseries, she does not realize until several weeks have passed that she has utterly lost her faith. How did it happen?

The truth that overwhelms Dorothy during her eight-month long struggle with poverty is that great masses of people on God’s green earth simply lack the mental luxury required for religion. Poverty kills thought, and with it, the impulse to form loylaties to myths about why we are here. We are here to eat, and most of us do too little of it, Dorothy discovers. Ideas that strike the comfortable few as life-enhancing philosophies are pure bunkum, and in fact never even occur, to those who must struggle constantly against hunger, exposure and disease. Although Dorothy does not quite rise to make the explicit observation, “Nice set up, God,” she does experience, in a variety of ways, the stuffing being knocked out of the fairytale of divine benevolence.

In recounting Dorothy’s journey, Orwell gives one of the best descriptions in modern writing of the manner in which faith departs the enlightnened mind. It rarely happens suddenly, by force of argument; it clears up over time. About three quarters through the story, as Dorothy escapes the all-out penury of street life for the mere gnawing insecurity of wage slavery, Orwell observes:

There was never a moment when the power of worship returned to her. Indeed, the whole concept of worship was meaningless to her now; her faith had vanished, utterly and irrevocably. It is a mysterious thing, the loss of faith–as mysterious as faith itself. Like faith, it is ultimately not rooted in logic; it is a change in the climate of the mind.

As a statement, A Clergyman’s Daughter is one of Orwell’s better novels. It puts into potent narrative form the criticism of Christianity Orwell introduces in the essay, “Tolstoy, Lear and the Fool.” There, he says Heaven-seekers are ultimately just shabby hedonists. They avoid the hard work of trying to improve this world–beset with certain loss and constant threats to dignity–for an imagined world in which we are opulently rewarded for being loyal to a solipsistic delusion.

Artistically, however, A Clergyman’s Daughter has weaknesses that are highly characteristic of Orwell’s style before the triumphs of Animal Farm and 1984. He occasionally reverts to the voice of the literary critic, following up a descriptive passage with an explanation of what it means. Even more often in A Clergyman’s Daughter, Orwell pauses telling his story to deliver acute passages of what we would today call immersion journalism. It is clear from Orwell’s descriptions of homeless life that he infiltrated the ranks of the dirt poor (in fact we know he did: that is the setup of Down and Out in Paris and London) to gain first-hand knowledge of their plight, and he looked directly into the sham of England’s unlicensed private schools, which existed only to collect fees and thwart the development of children. Orwell’s asides on these issues are highly revealing, but they remind us that he never allowed himself to come fully into his art until he had something luminescent to say about the human condition.