This is a blog about books and ideas, and I try to keep the mood appropriately grim. For those of us who dwell in our heads, life does, after all, appear to be a pointless warren of Kafkan dead ends, a spectacle of existential horrors, best met with a permanent affixture of the Edvard Munch Scream Face.

So let’s just go ahead and get it out of the way, shall we?– 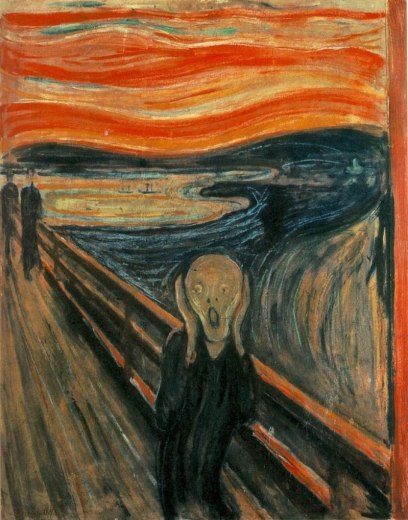 But the thing is, I while away so many of my allotted hours in pure animal joy, dumb as a dog licking the air as it holds its head out the window of a moving car (Where is that air coming from?) that I feel Munch can’t really speak for everything that goes on between my ears.

Because I am also a trail runner.

And here I come to my point. I only wish to keep up one blog, and it is about literature. It is not about athletics.

My sniffiness on this topic is not to protect a sense of purity about great books and ideas. Fully half the essays I write take wings somewhere along forest trails, and, shabby and pretentious as they may be, I know that I owe their existence to the endorphins produced by running.  I am already crossing the streams.

But the thing is, I have only so many hours in a day, and trail running is sort of an obsessive sport. If you tack blogging about trail running on top of trail running itself, you have pretty much blocked off your calendar for the rest of your running life. Unless you are a professional flaneur–and if you are, God bless you.

But today I can’t resist. For about the fifth time (I’ve lost count), I’m preparing for the Zermatt Ultra Marathon, a bucket list run, which takes place the first weekend in July every year in the shadow of the Matterhorn. It is a long, stately climb to the highest rail station in Europe, here. I’ve never made it to the starting line, but I’ve come close often enough to keep after it, year after year.

In 2013 and 2014 my knees were too rickety, and they gave out about three-quarters of the way through my training plan, somewhere along May or June. I couldn’t quite taste the race, but I could sense it just over the horizon.

In 2015 I had back surgery, after which I sort of died. So that year was a wash.

In 2016, still recovering from the long-term loss of fitness brought on by back surgery, I tried for a 61 km ultra in the Dolomites of northern Italy. It was an abject failure in a spectacular alpine setting. I got my pacing wrong and missed a cutoff time at the 35 km mark. I documented the ignominy here, along with a redemptive experience just a month later at the Heidelberg Trail Marathon. Live and learn.

Last year I was going like wildfire. I had taken a full month off during the winter, started in slowly with some stretching and strength training and steadily built up my speed, distance and climbing strength. By late-April of 2017, I was more or less in good enough shape to finish Zermatt, still three months away.

And then I got ambitious. I decided to do some speed work. On the last day of April I put in an intense session on the treadmill, running 10 km in an hour with a climb of 900 meters. If you use a treadmill, that means you’re going 6.2 mph on an incline of 9 percent. It may not sound brisk, but in hill running, you gauge speed on an entirely different scale.

I felt great while I was doing the run, but as soon as I stepped off the treadmill, I felt an unusual tightness near the top of my quad.

I won’t bore you with the details. It was a muscle tear, and it put me out of action for six months. Just like that, Zermatt was off my calendar again.

I came back slowly. I had no choice. Five kilometers one week, six the next. And always slowly. By January I was over the muscle tear and more or less back to normal. My off-season training started to look a lot like it had the year before–strong. But I was a year older and, I suppose, wiser. (Hemingway said the wisdom of old men is a myth. We do not grow wise with age, he said; we grow careful. He was a 30-year old shit when he wrote that.)

So I’ve made it through April this year without wrecking my training plan, and I still feel strong. In fact, I’ve experienced a minor miracle, a late-life relief of chronic runner’s knee symptoms which for several years had kept me from running on flat terrain at all. The whole reason I got into trail running is because I discovered that the shorter stride and lighter footstrike of uphill running was something I could do without inflaming my deeply unreliable knees.

And then, what do you know, but my knees up and became reliable. So far. Over the last two years I’ve discovered that I can mix a respectable amount of flat urban running into my training for the hills. It’s a kind of cross training. The hills are still where I grind out most of my effort, but the flats offer a new kind of freedom too. I’ve found I really love going out for a couple breezy hours and discovering I’ve sailed through 24 km rather than the usual 19 km chug through the hills.

So this weekend I’m trying something completely different. I’ve worked in enough long flat runs this spring that I’m doing the Gutenberg Marathon in Mainz as part of my cross-training for Zermatt. Except for a little tightness in my right Achilles, I feel ready. I did a 35 km flat run two weeks ago with no discomfort at all. In fact it was a lot of fun.

My heart is still set on Zermatt, of course, and I will quit 5 km into Mainz this Sunday if I feel like I’m jeopardizing my headline goal in July (hmm, maybe Hemingway was right), but for the moment I’m saying vive la différence!