As someone who likes to have my lunchbreaks to myself, at home if possible, I have always thrilled to the action in the first chapter of Nineteen Eighty Four. Although quiet, it throbs with the menace of a monstrous institutional encroachment on individual privacy–Winston’s Smith’s lunchbreak to be precise. Away from his office at midday, Smith is determined to be left alone and feel he has a life of his own despite the whole setup of Oceania, which is designed to abolish privacy. Margalit might say Oceania’s abolition of privacy debases and humiliates the individual. This humiliation is the crux of 1984‘s first chapter.

With ever more of our lives falling under surveillance, either by the government or the businesses that seek to monopolize government power, we would do well to go back and reread 1984, if for no other reason than to see what kind of humiliations we are willingly walking into.

It was a bright cold day in April, and the clocks were striking thirteen. Winston Smith, his chin nuzzled into his breast in an effort to escape the vile wind, slipped quickly through the glass doors of Victory Mansions, though not quickly enough to prevent a swirl of gritty dust from entering along with him.

I recently read 1984 for the tenth time. I keyed in on three things that jump out of the first paragraph.

First, the clocks strike thirteen, not one. Oceania has normalized the militarization of everyday life. Clocks no longer register the flow of an ordinary, peaceful day. By putting the people of Oceania on military time, clocks cultivate a mindset of permanent war. 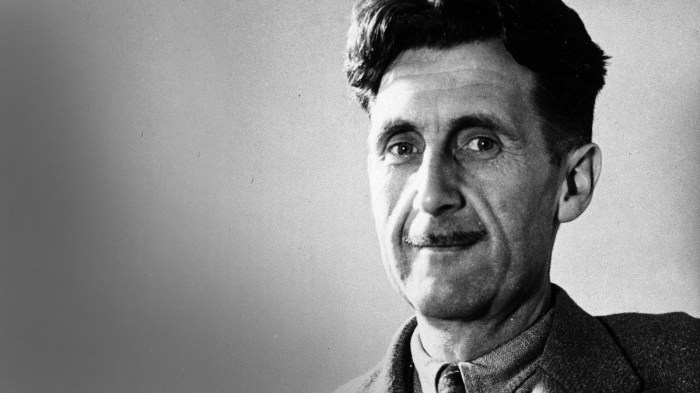 Orwell believed that ordinary things like units of measurement said something meaningful about who we are and could be manipulated by a sufficiently cunning authority to warp our self image. Most of us (Americans) dislike the metric system simply for ist foreignness. In 1984 Orwell imposes metric measurements on Oceania because he sees in the perfect divisibility of meters and liters and so forth a sinister regimentation of units that could have been left alone to express a tradition. This is why he liked pints of beer, for example. They were marks of a past world made up of folksy, unregulated habits of mind that didn’t need to be rectified in the laboratory or focus group.

In other words, Orwell thought that not just humans, but even our artifacts could be made to speak a new language that serves the interests of a hidden authority. This would be a kind of Newspeak for non-human speakers. In our age, where artificial intelligence devices such as Alexa help us run our (“private”) households, it is worth bearing in mind that these AIs are capable of conditioning us to favor certain words, concepts and thought routines over others. This technology has been fashioned by corporations whose job is to addict us to spending money on them. The goal of making our lives easier or more glamorous or more intersting is subordinate to the goal of influencing our patterns of consumption.

The second thing that jumps out is the name of Smith’s home, Victory Mansions. It is an official lie. To be more precise, it is two lies in one. We find out shortly that Smith’s home is no mansion. It is a dreary, dilapidated midrise apartment, like every other party member’s home in midtown London. A little later we learn that victory does not exist  as a verifiable fact in Oceania. “Victories” are always events of official propaganda, with no empirical ties to reality. They are signals to the masses to acclaim Oceania’s military might.

By giving a false name to an individual’s home, Oceania’s government poisons the idea of home as a refuge where the world can be made right, if only privately. Big Brother has invigilated his belief-forming power into the one place where the individual was supposed to rule her own thoughts.

Big Brother’s most awful power to control the home rests in the telescreen, of course. As Hannah Arendt pointed out in her short 1970 book On Violence, an authoritarian regime  relies crucially on implements to rule through force. But the power of the Victory Mansions lie is that it prepares the individual to accept even casual mendacity about the inconsequential as a typical feature of government power.

I live in a new section of suburbs, so I see this kind of casual mendacity at work all around me in the names of new neighborhoods under development. One new neighborhood might be called Fox Hills. There is not a fox or hill in sight, but we are meant to associate whatever appealing images that name calls up with the new homes for sale there. Other neighborhoods have (ridiculously) aristocractic sounding names, formulated to heighten feelings of class difference. If you’re even in the slightest cowed by the name of Westin Estates, for example, good, you probably don’t belong there. It matters not one whit that there never was a Lord Westin. The imaginary version of him has done its job.

A person conditioned to accept such thoroughgoing dishonesty, even in matters that seem inconsequential, is postured to accept the humiliation of being ruled by a government and by corporations that lie flagrantly and systematically.

The third thing that jumps out of 1984‘s opening paragraph is a whisp of foreboding symbolism. That swirl of gritty dust that Smith tries but fails to keep out of his home? It is a sign that some things take on the power to overwhelm the individual despite our best efforts. An ordinary wind might be acceptble to most of us. Most of us can live with the prospect that there are large, impersonal forces in the world, such as nature. But by making that swirling wind vile with grit, Orwell warns us that men, who desire ruling power over all things, will seek ways to ride the coattails of nature into our private lives.

In my next posts, I’d like to observe Winston Smith further along into chapter one as he commits the thoughtcrime of writing in his journal. This is the tragic-heroic act that sets Smith on the path to destruction. Simply trying to be an individual defies real powers in the world whose imperative is to extinguish individuality.