I wonder how many Americans know about the first suicide terrorist attack by airplane after 9/11.

It happened on February 18th, 2010. Fifty-three year old Andrew Stack III flew his single-engine Piper Dakota into an office building housing a local branch of the IRS. In addition to killing himself, Stack killed a civil servant, father of six.

Stack was mad at the IRS over a long drawn-out tax dispute. But he was mad about lots of other things too. In a suicide note he wrote shortly before setting fire to his home and launching his attack, he railed against corporate greed, the government’s bailout of the financial sector, health insurance, and the Catholic Church.

At bottom, though, what angered Stack most was having been defrauded by his own country, as he saw it. Its institutions had indoctinated him with phony beliefs about the interconnectedness of freedom, hard work, and propserity. The founding fathers, he wrote in his suicide note, had fought against taxation without representation, but the country today was throwing that legacy in the trash. President Obama, with his tax-and-spend healthcare plan, was not just leading us to ruin but was  adandoning what it means to be American.

Austin Hess, a young Boston engineer, could relate. At a rally against Obamacare the month after Stack’s suicide attack, Hess protested, “All the government does is take my money and give it to other people.” (We later come to learn the delicious fact that Hess’s paycheck comes from the Departments of Defense and Homeland Security. As the world’s largest empoyer, the federal government gives as well as it takes.)

Andrew Stack’s strange, sad terrorist attack caught the same reactionary Zeitgeist that gripped Hess and other members of the Tea Party movement then spreading across the country. Less than one month into the Obama administration, a cacophony of conservative voices was buffetting the new president with accusations of socialism, godlessness, and crypto-Islamism, among other things.

Fox News commentators, business leaders, right-wing think tanks, and Christian Fundamentalists all accused Obama of betraying the American Revolution. They gathered in Boston on April 15th, tax day, to protest the new regime of taxation without representation. They could feel the Founding Father returned to life and standing shoulder-to-shoulder with them, seething in anger, sensing some kind of alien menace they couldn’t, or wouldn’t, quite define. Well, one Tea Party sign dared to define it: “Spell-Check says that OBAMA is OSAMA,” it read.

In the formative days of the Tea Party, Fox News commentator Glen Beck set up his studio to look like a school room, the better to instruct his viewers on the real meaning of the American Revolution. Unburdened by the slightest sense of irony, Beck said he was fighting the forces of “indoctrination,” the same thing that had gotten under Andrew Stack’s skin before he crashed his plane into the IRS building. Beck implored his viewers to “hold your kids close to you” and teach them about the revolution that George Washington had led–a revolution rooted in “God and the Bible.”

Americans, rich and poor, dumb and smart, high- and low born, are forever invoking the Revolution, the Founding Fathers, and the Spirit of 1776 to  sanctify their political claims about the present. When it comes to having political arguments, “[n]othing trumps the Revolution,” writes Jill Lepore in her wonderful 2012 book The Whites of Their Eyes: The Tea Party’s Revolution and the Battle over American History. 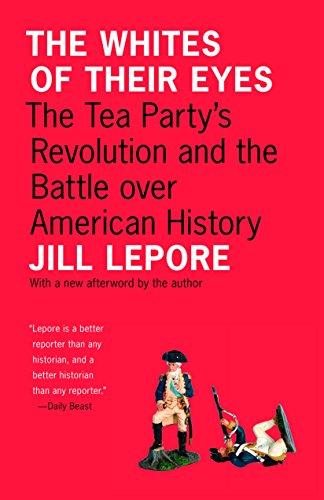 As is the case with all of Lepore’s books, The Whites of Their Eyes is a wise, humane, intricately argued work of history. There is nothing reductive about it. I risk betraying Lepore’s generous intelligence, then, by beginning on a slightly reductivist note, a list  Lepore forms of things that have been thrown into Boston Harbor as acts of political theater. They have included:

A fake container of crack cocaine

No doubt there have been other things flung into Boston Harbor as well. The point Lepore wants to make is that it is reflexive for us Americans to escalate our political protests to heaven, always beseeching our gods, so to speak. The objects thrown into Boston Harbor are meant to symbolize not just wrongs in need of remedy but fundamental betrayals of one or another of our founding principles. From crack to non-union beer, they are the kinds of thing that should cause our Founders to roll over in their graves, we are told.

But here is a paradox: anyone with an axe to grind can play this game. The conflicted political discourse that produced the American Revolution was so capacious and so contentious, it can accommodate almost any post-Enlightenment political idea. Lepore writes:

The remarkable debate about sovereignty and liberty that took place between 1761, when James Otis argued the writs of assistance case [about British laws that basically established police powers in the Colonies], and 1791, when the Bill of Rights was ratified, contains an ocean of ideas. You can fish almost anything out of it.

And fish we do. Almost any set of opposing causes can be found and seized upon in the body of historical writings comrpising the record of the American Revolution. Perhaps the most (in)famous is the matter of religion and theism. Cast your line in the shallowest waters of the revolutionary texts and you find Christian theism plain and simple–rights being endowed by God and all that. Fish a little deeper and you’ll find founders who betray not one whit of genuine theism–even outright rejections of it. Thomas Paine, with whom Glen Beck likes to compare himself, used his dying breath to repudiate Christianity, telling his doctor he had “no wish to believe.” Benjamin Franklin, and expert bookbinder, inserted a lampoon of Biblical-sounding nonsense into his Bible to prank anyoneone who would listen. Faith of our fathers?

History, the making of it and the writing of it, is an argument, Lepore says over and over. Its outcomes and processes were never fixed in the stars and cannot be chiseled into stone tablets. But the problem is, we treat our history, especially of the Revolution, as if it were so fixed. Using history to make political arguments requires creativity, empathy and reason, but our attitude is all too often self-assured idolatry, writes Lepore:

People who ask what the founders would do quite commonly declare that they know, they know, they just know, what the founders would do and, mostly, it comes to this: if only they could see us now, they would be rolling over in their graves. They might even rise from the dead and walk among us. We have failed to obey their sacred texts, holy writ. They suffered for us, and we have forsaken them. Come the Day of Judgment, they will damn us.

This is not an appeal to history, says Lepore. It’s fundmentalism, or what she somtimes terms “anti-history.”

What she means is that history is not simply a transcribing of facts established in the firmament. Any historical approach that posits its subject is a fossil record of this kind is bound to fail; it goes against the spirit of studying and writing history. As Orwell once wrote, good history should “make the past not only intelligible but alive.”

The facts and the character of the American Revolution were never fixed. They were contested from the outset and continued to be contested immediately after independence. John Adams and Thomas Jefferson disagreed entirely on what the revolution was; Adams maintaining it consisted in legal and political actions leading up to the Declaration of Independence, Jefferson saying it was the war for independence itself. For Benjamin Franklin, the revolution began with and consisted primarily in a crusade against established religion.

It did not take long for fights over the meaning of the Revolution to escalate into terms we would recognize today. Jefferson praised Shay’s Rebellion in 1787 as a sign of patriotic vigor. Adams said the rebels should be violently suppressed, as the constitution demanded. And the ink was not even dry on the document that was to ground this authority.

When Jefferson was elected as the third president, succeeding Adams, a Boston newspaper declared that Jefferson had ridden “into the temple of liberty on the shoulders of slaves.” This because his win had been made possible by electoral votes created by the three-fifths clause. Had there been any founding fathers in their graves at that early date, surely Americans would have been alerted to their rolling over in them.

And what did Jefferson himself think of the power and meaning of the constitution? Toward the end of his life Jefferson wrote, “Some men look at constitutions with sanctimonious reverence and deem them like the ark of the covenant, too sacred to be touched. They ascribe to the men of the preceding age a wisdom more than human.”

Jefferson was better positioned than any other framer to recognize how deeply disputation ran through our founding documents, what a human creation it was. A lifelong slaveholder, Jefferson was so profoundly conflicted over slavery that his first draft of the Declaration of Independence included what could be fairly called an argument with himself over slavery. In “a breathless paragraph, his longest and angriest grievance against the king, Jefferson blamed George III for slavery,” Lepore writes, specifically for not abolishing the slave trade with the colonies. Jefferson’s contemporaries disagreed with his anti-slavery passage, some saying it went too far, others not far enough. In the end, the passage was left out as a tactical expedient: the other framers thought it would open the colonists up to charges of hypocrisy, given how thoroughly slavery was embedded in their economy and culture.

In 2010 the Tea Party’s sanctimony would sometimes become more than a little bathotic, as when its members insisted on Congressmen and other adults reciting the Pledge of Allegiance. The Pledge’s author, Francis Bellamy, was a socialist who was once chased from the pulpit for demandng the rich be taxed heavily and their wealth given to the poor. Bellamy wrote the Pledge as part of an ad campaign to promote something his boss’s company invented called the “flag movement.” They wanted to sell flags to every school in America. The Pledge helped their business. It was meant to indoctrinate children.

Lepore urges us to understand there are no political conclusions that can be lifted directly from the founders’ principles or the history of the American Revolution. History is alive, but not in the sense the Tea Party say it is. If we wish to understand anything of the founders’ principles, we have to go back and examine them in the tension from which they arose, and the tension they never escaped. The idea that the wisdom of an ealier generation could resolve poitical contests with sacred revelations was precisely what the founders rejected. And we know this becasue of the disputes they had with one another, and which never stopped. “They believed that to defer without examination to what your forefathers believed,” writes Lepore, “is to become a slave to the tyranny of the past.”

One thought on “Review of “The Whites of Their Eyes: The Tea Party’s Revolution and the Battle over American History” by Jill Lepore”